Here is what our volunteers have to say…

It’s Too Complex…
But the basic reason is I want to have a happy life and the best way to make myself happy is to make a kid happy.

It Gives Us Much Joy…
CASA is near and dear to our hearts. It is sad to see children that experience the turmoil that most children in this situation do. However, it gives us so much joy to be able to help be a solid presence in that child’s life.

Children Need to Succeed…
I believe that every child needs an opportunity to succeed. Some require more help and support along the way. But, if I can help provide opportunities to a child who might be struggling, it is a blessing to the entire community.

We Face the World Together…
When a child is in the midst of upset and confusion, I provide a calm and consistent presence in their life. We face the world together and work to find a solution that brings peace, comfort and a bright future.

The One Constant (Izmo’s Story) 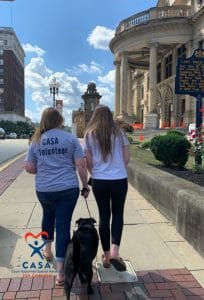 Izmo and I entered the room and the four children reacted with apprehension. They had never met a therapy dog before, and like everything that had happened to them, this situation was new and unnerving.

The children, ages 15, 14, 10 and 4, needed the kind of help Izmo and I could offer. While their foster mother was doing an outstanding job, she needed support as well.

When I first met these children, they were quiet and unsure, but introducing them to Izmo helped to relive their stress and anxiety. It was not long before the children began to look forward to our visits and trust me. During our visits we talked about things they liked to do and about school and friends. They shared their frustrations and fears with me.

I am a CASA, a Court Appointed Special Advocate, in Washington County and my job as a volunteer is challenging, but so rewarding. I advocate on behalf of the children and I am their voice. In the revolving door of agencies and service providers, Izmo and I are the one constant in the lives of the children.

Thirteen year old Kevin was my very first case.  His journey through “the system” had begun at the age of 10, when he was found at a fast food restaurant wearing only his pajamas.  It was October, but Kevin had no shoes, no coat and no parents to be found.  In the next two years Kevin would be placed in five different foster homes. Sadly, I was not shocked to learn that his home environment was deplorable.  That is common for children in the foster care system.  But I was very shocked to learn that Kevin had never had any formal education before his placement in the foster care system.  At 10 years old, his behaviors were that of a four year old child and his educational level was that of a Kindergarten student.

As I was preparing for my first meeting with Kevin, I anticipated that communication with him would be difficult; he was language delayed, emotionally delayed, and developmentally delayed.  I was informed that he spoke often in sounds only and was extremely uncomfortable with making eye contact.

When we first met, Kevin briefly glanced up at me and then quickly returned to his video game.  I started to communicate with him but was very careful to limit my eye contact.  He spoke of the game, made some sounds and some gestures. The conversation seemed like a game of ping-pong and I didn’t know where it was going.

Without warning, Kevin put down his video game and gestured toward the heavens.  He looked directly at me and asked “Are you God?”

After what seemed to be an eternity (but likely was just a few seconds) I responded to him gently.

“No, I am not God.  But I do believe that God sends people to us when He feels we need them.  If you would like to think of me as an angel on your shoulder that is fine with me.”

Kevin smiled from ear to ear.  In that brief moment he touched my heart forever.  I knew that I had made the right decision to become a CASA volunteer.  Seemingly satisfied with my answer, Kevin retreated back into his video game.

Additional confirmation that I had made the right decision to become a CASA volunteer occurred several months later at the National CASA conference in Washington DC.  With over 1,000 people in attendance, a guest speaker was sharing her experience of growing up as a victim of sexual abuse and the impact of her CASA volunteer.  She said that she had heard CASA volunteers called many things, but she felt that CASA volunteers were “angels sitting on the shoulders of children.”  Immediately, tears filled my eyes.  It was as though she was speaking directly to me.

After four years, I am happy to say that this story has many positive outcomes.  Kevin has been living in a therapeutic foster home with a loving family, and he is making significant progress in all aspects of his life.  I could not be prouder of Kevin and his achievements.

Kevin’s smiles are much more frequent today but each touches me as deeply as that first smile did on the day we met.  When I stood in front of the Judge as a new CASA volunteer, my hope was that I might make a difference in the life of a child.  Little did I know that a child would make such a difference in my life.

If you are interested in changing a child's life by becoming a CASA of Washington County child advocate...Volunteer Today!
Translate »
MENU